Family Bible Game Review of Mission: Ends of the Earth

The folks at Bible Games Central recently asked me to review some of the latest Christian games added to their catalog. I reviewed some of their card-based games last year, and this year, the games go beyond cards.

Before I get into to the review, however, a quick disclaimer: although Alvin Gan is a contributing author to this site, neither he nor Bible Games Central have paid me for any game reviews nor am I an affiliate of their company (I receive no compensation from links to their site).  The review below (and all reviews of their games) is my honest, unfiltered opinion, and I try to be as objective as possible.

In this review, I’ll be looking at Mission: Ends of the Earth, a path-based board game in which players must move their “missionaries” to their specified destination.  This review will evaluate the game’s design and construction, the overall gameplay, some weaknesses of the game, and then offer some final thoughts and recommendations. 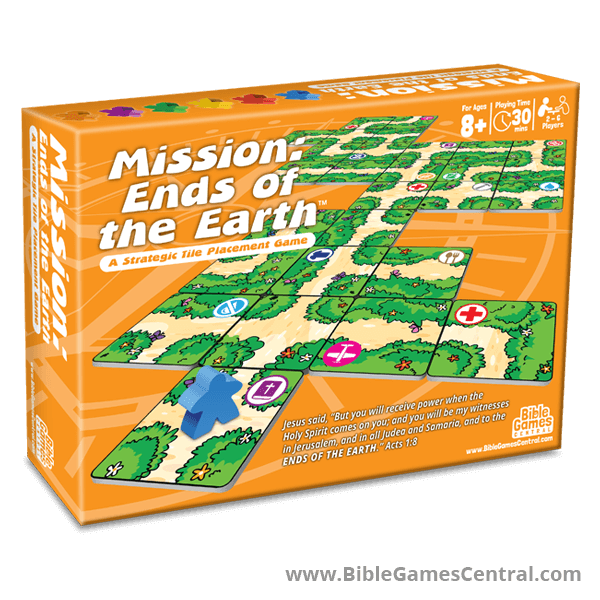 Mission: Ends of the Earth

Purchase Mission: Ends of the Earth

Upon opening the game, it’s quite evident that care is taken when making these games.  The game’s box is thick and sturdy, a stark contrast to some of the cheaper, thinner boxes used by multi-million dollar toy companies such as Mattel and Hasbro Parker Brothers.  Bible Game Central makes their game boxes to last!  Also, there are custom sections in the box to keep the game pieces organized (though it doesn’t always work as intended—see weaknesses below).

The player pieces are made of wood instead of the traditional plastic or metal, and they are shaped like little people (our son loves the “red guy”).  Likewise, the die is also made of wood rather than the typical plastic or resin.  I’m not sure if this is more or less expensive, but it does give the pieces a unique feel and texture.  However, because the die is wood, it is lighter than standard dice and may not be as durable; repeated use could cause it to wear down quicker.  I suspect, however, that the die will last a long time, probably longer than the game board or other cardboard pieces.

The cardboard pieces used in Mission: Ends of the Earth—the path squares and resource disks—come in frames.  The pieces came out of their frames with ease and showed no indication of tearing or other damage one often sees when removing pieces from frames.  Additionally, the cardboard used is quite thick and feels durable.

Mission uses bright colors and cartoon-influenced artwork, common on games, especially those geared toward kids.  However, they are neither garish nor childish, but have an appealing charm that even adults and “kidults” alike will appreciate.

As a Christian, I greatly appreciate that the game is influenced by Scripture.  Mission: Ends of the Earth is based on Acts 1:8 and uses the Greek words for the cardinal directions (north, south, east, west) from Luke 13:29.  All this aligns with the evangelistic and Bible-teaching mission of Bible Games Central.

When I first looked at Mission, I was concerned the game could be too complex for children to grasp and follow.  Where do you place the path pieces?  How do you move?  What’s with all the different disks?  However, after reading the instructions, my initial concerns were gone.  The foldable instructions were clear and descriptive, allowing me to quickly understand how to play the game.

Mission: Ends of the Earth offers an imaginative twist on the traditional path-based board games.  Instead of just rolling the die and moving a certain number of spaces along a pre-determined path, players choose how to lay out the various path pieces, “missionaries” can move in different directions (including backwards), and the board can end up looking different each time the game is played.

The objective is to move your missionary from the starting location to the designated destination, gathering the needed resources along the way.  Instead of the die indicating how many spaces to move, the number tells you how many options you can invoke: lay down a new path tile, move your missionary, dig up and move an already-placed path tile, or a combination of these.  As a result, the gameplay is more creative, unique, and invokes more strategy than a basic kids or family path game.

As a result, though the game seems targeted toward kids, Mission’s creative, strategy-infused approach results in a game that kids, youth, and adults would enjoy playing.  However, the gameplay isn’t perfect.

Mission: Ends of the Earth has many things for which it can and should be praised, but it also does have some weaknesses—it’s not perfect.  The main weakness is the limited number of path pieces can result in a relatively short game compared to others, like Monopoly, which can last an hour or more.  As such, some older kids and adults may feel like the game ends too quickly.  I recommend adding about 50% more path pieces to allow for the game to last longer.

The second weakness (and it’s more or a parental gripe) is something that’s common in board games: the pieces go everywhere in the closed box unless it is kept flat and even.  I mention it because Mission includes an internal storage system that appears like it’s intended to keep everything organized (something not all board games include).  However, if the box is tilted at all or placed on it’s side for storage, piece organization disappears.

Drag the bar below left/right to see the comparison.

Mission: Ends of the Earth is an imaginative, creative twist on the traditional path-based board game.  It offers a unique gameplay that kids, teens, and adults may enjoy.  As such, I recommend it for friends and families!

However, although the gameplay seems like it could be short, that does not mean it must be short.  Because of the strategic aspect of the game (e.g., choosing which resources to gather, deciding where to place path tiles), some settings such as Sunday school classes or small groups may not have adequate time to finish the game before their group time expires.

Overall, though, Mission: Ends of the Earth is a game I highly recommend!

Purchase Mission: Ends of the Earth
About John L. Rothra 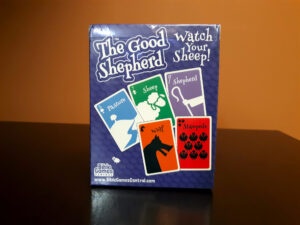 Review of the Christian Card Game The Good Shepherd 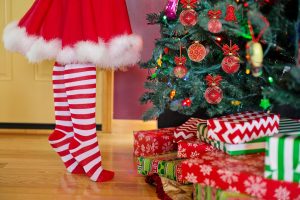 The Story of Christmas Minute to Win It 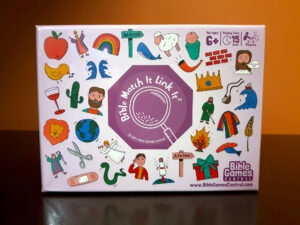 Review of the Game Bible Match It Link It