Review of the Game Bible Match It Link It

This is the fourth of my five reviews of Bible-based games developed by Bible Games Central.  In this one, I’ll be looking at Bible Match It Link It, a tile-based matching game based on stories in the Bible. This review will first address the game’s materials and construction, then discuss the overall gameplay, highlight any weaknesses or issues with the game, and finally offer my overall thoughts and recommendations.

As always, a quick disclaimer.  The owner of Bible Games Central has contributed articles to this website.  Nevertheless, I have not been paid for my reviews, and the opinions expressed are my honest thoughts given as objectively as possible.

Bible Match It Link It is a relatively new game (released in 2021) by Bible Games Central, a company that develops Christian and Bible-based games for families.  This game is a matching game that comes with octagonal tiles, “tokens,” and “story cards” designed to both provide family entertainment as well as tell people about Jesus.

The game comes with instructions, 57 tiles, 57 story cards, and 36 tokens.  I’ll begin by looking at the overall construction. 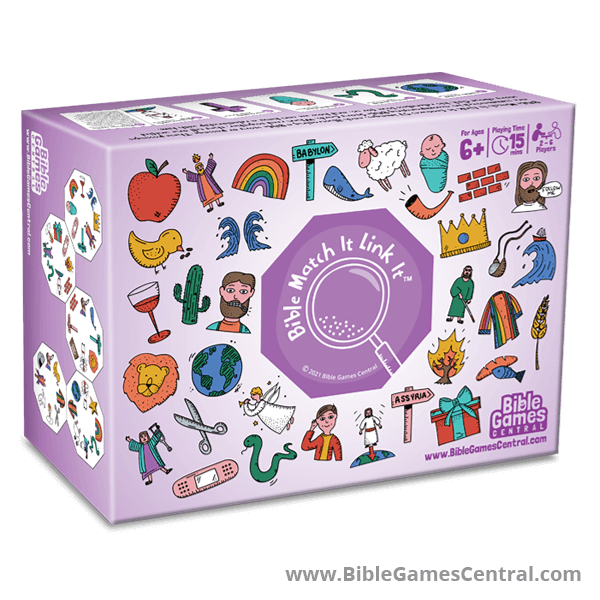 Bible Match It Link It

Purchase Bible Match It Link It

Like other games from Bible Games Central, Bible Match It Link It comes in a brightly colored, attractive, and sturdy cardboard box that feels both durable and well made.  The game pieces are stored inside a plastic container with sections designed specifically to keep the pieces well organized.

The instructions are on folded, laminated paper that feels thick compared to what I’m used to getting from game manufacturers.  The text is easy to read and the colors are both attractive and vibrant.

The game tiles, as noted earlier, are octagonal with each side having a different picture.  These pictures correspond to a story card that tells a Bible story based on the picture.  Whereas some game companies will use thinner, less durable pieces, the tiles in Bible Match It Link It are thick and sturdy, and each side has a very subtle texture, which I find a nice touch.

The game includes “tokens” which were not at all like what I expected.  When I think of game tokens, I think of flat, thin, circular pieces of plastic.  However, these tokens are actually wooden pieces shaped like people.  They come in six bright colors: green, blue, red, yellow, orange, and purple.  Although small, they are large enough for young children with small fingers to handle with ease.

The story cards also surprised me.  Bible Games Central’s cards are often relatively thick and feel sturdy.  These, however, felt thinner and less durable that what I usually encountered.  Although seeming thinner, they do not feel cheap.

Although the game pieces are well made, what matters as much if not more is how the game plays.

By offering multiple gameplay options, players will have more fun with Bible Match It Link It, and may find themselves playing more often and for longer each time.  Three of the games are primarily matching games, and one, “Four in a Row,” uses matching as a vehicle for trying to place four tokens of the same color in a row (imagine Connect Four, but you have to match pictures before taking the space).

Young children will especially love “The Big Picture,” which is a cooperative style in which the players work together to match pictures.  Thus, young players who may easily overlook matches or may become discouraged when they cannot keep up will be able to play along at the same pace as older players.

Whichever of the four gameplay option players choose, the game mechanics remain unchanged.  The rules for matching pictures are the same in all games, making it easier to learn each individual game.

Additionally, Bible Match It Link It comes with story cards.  Each card corresponds to a picture on the octagonal tiles and tells a Bible story based on that picture.  The cards are sequentially numbered so that, when read in order, it tells the gospel from Genesis through Revelation.  This makes for a wonderful teaching tool or evangelistic activity.

Although the Bible Match It Link It comes with a wide variety of playing options, it does have some weaknesses.

I found two weaknesses overall, though one of them relatively minor.  Although the instructions were easy to read, I had to read the gameplay instructions for “Frenzy” a couple of times to fully understand how to play that game (but maybe that’s because I read the instructions late at night).

The only major weakness of Bible Match It Link It is the story cards.  I read the instructions twice.  My wife read the instructions.  Afterward, neither of us had any idea how to use the story cards in any of the games.  There are no directions regarding how the cards fit in with any of the four gameplay options; there is only a very brief description of them at the very beginning.  Thus, players will either have to figure out something on their own or (what I think many may do) ignore them altogether.  I think Bible Games Central should review their game instructions and provide players directions on how to incorporate the story cards into the gameplay.

Bible Match It Link It is a well-constructed, well-designed game (with the exception of the story cards).  The fact that it comes with four different ways to play adds to the games overall appeal and invites people to play more often and for longer amounts of time.  While some games seem more suited for younger players or for rainy days, Bible Match It Link It would appeal to players of any age.

Because of its gameplay variety, I think this would be an ideal game for families at home, game night with friends, and church small groups/Sunday schools.  It provides a way to teach the Bible, share the gospel, promote fellowship, and have fun! 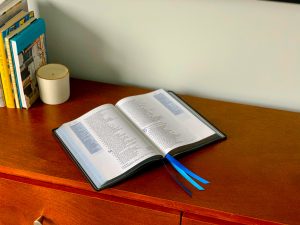 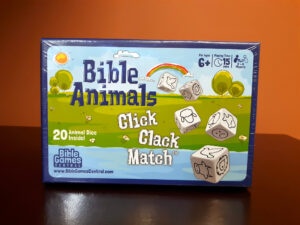 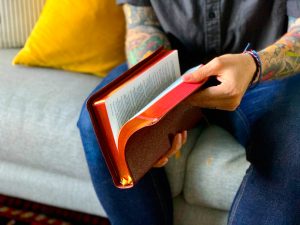